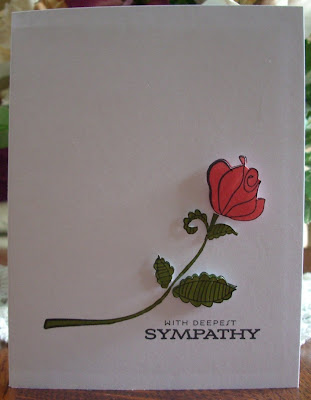 This card is for my sister-in-law and her family. Her mother passed away Sunday night due to cancer. She was such a special person. We saw her in June and she looked great. In August she found out she had stomach cancer and that it had spread throughout her body and there was nothing they could do for her. So sad.

I started with a card base (Papertrey Ink Stampers Select cardstock) on which I had stamped the sentiment, from Papertrey’s anniversary set. (When Harriet (allycatcards) was here in June, she brought her PTI anniversary set. I stamped a couple card bases using the sympathy stamp.) I used a rose stamp from an Inkadinkado set, bending the stem quite a bit and the rose just a little bit before I put it on the acrylic block. I stamped it directly on the card base, and also twice on another piece of white cardstock. I colored all three images using Stampin’ Up! Old Olive and Cameo Coral markers. I cut out the flower from both extra stampings, and also the leaves. I mounted the cut-out pieces on Pop Dots and layered them. The rose has two layers popped up and so does the largest leaf. The other leaves have just one popped up layer.

We will be heading out of town later this morning for the funeral and will spend a few days with family. That means that every weekend in September we were out of town! Makes it kind of hard to get much stamping done. (Or housework!) Hopefully soon I will be able to share cards here more often again.

Thanks so much for stopping by, and I hope you’ll come back and visit again soon!

The card is lovely, Lynette. A time when a simple card can say it all.

It's a lovely card, just sorry it is for such a sad occasion.

Have a safe trip - your card is lovely - I am sure it will be appreciated.
Mary-Jane

I am so sorry for your sister-in-laws loss. And for your loss too.

I am certain that your SIL will appreciate your making a card for her. It is a lovely card Lynette.

Have a safe trip.
Mary

Sorry for the occasion but a very nice card!

I'm sorry, Lynette. That is so terribly sad (and scary). Your card is beautiful though and I'm sure it will be greatly appreciated.

your work is very nice Lynette. Sorry to hear about your SIL losing a loved one. I went to a breast cancer crop tonight at Archiver's. Death is never easy. I feel your relative's pain. Stop by Anchor and say hello when I'm teaching.

Very special card. I know she will appreciate it.

Lynette
Maple Grove, Minnesota, United States
Like many others, I am totally addicted to stamping and accumulating stamping supplies. What a fun addiction, and a wonderful way to meet new people! I have been very happily married to my wonderful husband, Jim, for over 45 years. We have two married children, four grandsons, and one granddaughter. Our daughter, son-in-law, two grandsons and granddaughter live in Chicago, and our son, daughter-in-law and two grandsons live ten minutes from us.